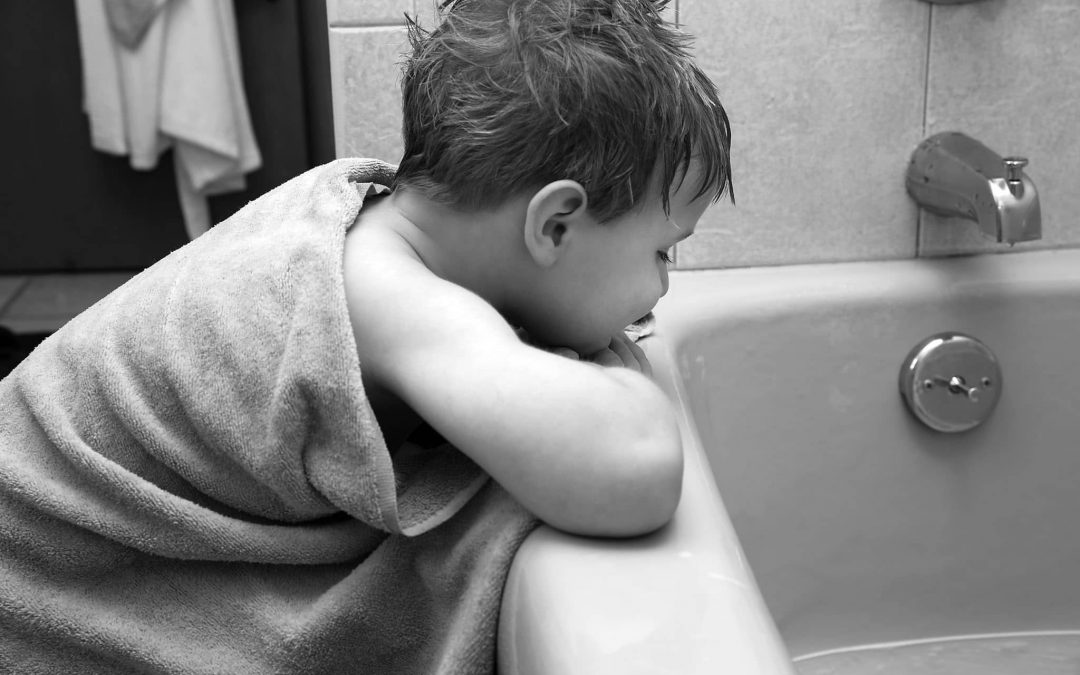 I recently divulged to my husband a little trick I use to get our kids to focus on self-care like brushing teeth and bathing and he laughed at me.  I thought it might make a good parenting hacks article so I’m excited to share this with you today in hopes of making your parenting lives better!

Have you ever had trouble getting your kids to do a thorough and complete job with routine self-care independently?  Like with brushing their teeth or bathing for example?  I don’t know about your children but mine are distracted by every little thing (namely playing around with each other) and oftentimes don’t concern their busy little minds with the less-important task at hand.  They prefer to sword fight with their toothbrushes rather than brush with them.  They prefer to just lie in the nice warm bath water splashing around instead of wash their little bodies clean.

One thing I’ve come up with to combat this problem is the “play-by-play.”

I assume the role of a sports announcer and start explaining every little step they take toward tackling the goal at hand in my best Bob Uecker voice.  At the end I give each of them a score on how well he performed.  The score means absolutely nothing.  There’s no prize.  Just a score.

If you’re still having trouble picturing how this works keep reading.

Imagine your child is lying in the bath playing around and not washing his body even after you’ve nicely reminded him to get started 17 times.  Instead of repeating yourself over and over, or worse yet yelling at your child, try this:

“And he’s picking up his scrubber (nevermind that he doesn’t even have it in his hand yet…he’ll pick it up lightning fast once he is familiar with the game) and he’s starting with his feet.  He’s scrubbing and scrubbing and working so hard.  Look at that folks!  He’s washing the bottom, he’s washing the top, he’s even getting between each of those little toes!  And now he’s moving on to his ankle…and now the knee…moving up getting every inch of his leg and WOAH!  He’s moving on to the other leg now.  Look at those hands work, scrubbing back and forth and up and down..!”  You get the idea.  Keep talking and explaining everything he does in a very excited fashion.

My kids EAT THIS UP!

They ask for me to do this for them all the time and it’s really very little effort on my part.  I just have to talk and pay attention to them.  Easy peasy!  The bonus is that they really do a fantastic job washing as a result.  At the end they ask me how well they did and it’s always a SUPER good score of course (because hello…they deserve it!).  On a scale of 1-10 it’s usually a 14.5 (started out as 10 but then moved up to 10.5, and now after several years of doing this it’s worked it’s way up).

So if you’re finding yourself pretty desperate and not knowing how to get your kids to cooperate try your hand at sports announcing!  I can’t guarantee that it will work on your kids as well as it does on mine but let me know in the comments if it does.  I’m interested in knowing!  I’m particularly curious to know if it works on girls as well as boys.  Having only boys I’ve never had the chance to try it out on a girl but honestly I think the attention you’re pouring into your child in this “game” is what is so attractive to a child no matter their gender.  What do you think?

Interested in specials, VIP announcements and tips and tricks for taking better pictures?  Take 30 seconds to sign up to receive my newsletter delivered to your inbox every once in a while.  Click here to join in on the fun!  I promise never to spam you!